Nebraska’s Educational Service Unit system began with the passage of LB 301 by the Nebraska Legislature in 1965. Since that time the Educational Service Unit system has undergone numerous changes that have expanded and improved the quality of service delivery. ESU 7 became fully operational in the fall of 1968. Today ESU 7 serves the K-12 school districts of seven counties from its offices at 2657 44th Avenue, Columbus, Nebraska.

The passage of LB 806 by the Nebraska Legislature in 1998 marks the most recent significant change for the ESU network. This legislation established Core Services and thrust the Educational Service Unit system into a significantly expanded role of state-wide school improvement. Prior to the passage of LB 806, diversity of services between Educational Service Units was quite marked. Since its passage, services have been prioritized into three major categories directed at the improvement of teaching and student learning. The three core services identified in the priority order are: staff development, technology and instructional material services. In 1999, funds were allocated by the state to support and sustain the technology infrastructure that had been established in 1993 under LB 452.

LB 806 called for effectiveness and efficiency in service delivery that could be evaluated on a state-wide basis. At the time the current accreditation process for ESUs consisted of an onsite visitation and study every seven years. In accordance with Section 3 of the law, the State Board of Education sets the minimum accreditation standards. These standards hold ESUs accountable (to the taxpayer) and assure that all school districts receive equitable and quality educational opportunities. In 1999 two committees were created to review ESU accountability and revise the accreditation process. In 2001 these two communities were merged. ESU 7, along with two other Educational Service Units became involved in a pilot study designed to develop a new system of accreditation that mirrors the school improvement process, is ongoing, data driven and looks at the value added to area school programs. In addition to accountability language, LB 806 outlined an advisory and approval process that requires Educational Service Units to annually prepare a core service plan that must be approved by 2/3 of the public school districts being served whose student population represents more than 50% of the total student population of the unit. 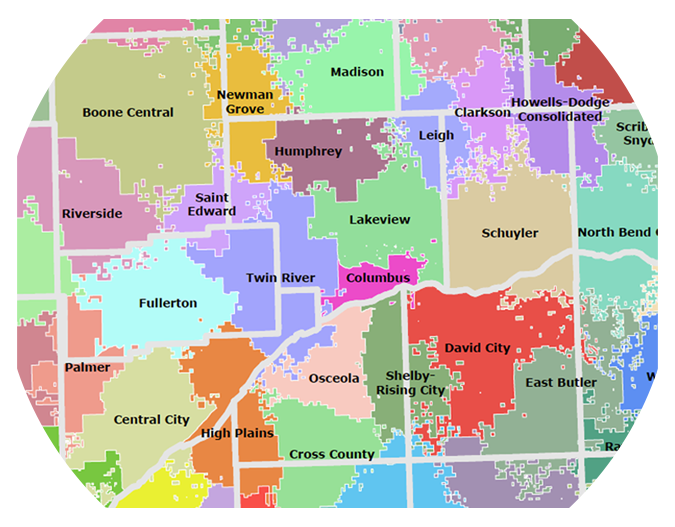